I think the question is not one of “direction,” but “balance.” What would be the “right direction” anyway?  East or west? 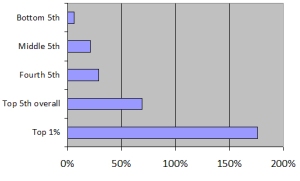 Wages are too low.  CEO salaries are too high. Too much wealth goes to profits. Average Americans are “underwater,” while corporations hoard wealth.

We have too many poor people at the bottom; hardly anyone remaining in the middle.  And a relatively small cohort of the wealthy — and the associates and lackeys of the wealthy (who are nearly rich or merely affluent) — at the top.

All the money and the power is at the top, very little money and power at the bottom.

The financial sector is bloated, the industrial base is rusted and hollowed-out.

Demand is too low, and supply is too high. The supply-demand equation is a worldwide phenomenon. The whole world generally has an excess supply of nearly everything, including production capacity. Most telling, we have a worldwide surplus of labor.

Too much greed; too little love. Too much corruption and incompetence in all our institutions. A deficit of honesty and diligence.

Too many putting their faith in luck; giving up on work. Too much speculating, not enough investing.

The winners have more money than they can use; the losers are broke. We have a complete failure of compassion and justice. The winners are tired of hearing about the losers. They just want the losers to shut up. Sit down and shut up. Or better yet, lay down and die.

I wonder what would happen if all the Americans who don’t have the sense to lay down and die suddenly found their voice and their anger. Probably isn’t going to happen, because society is muddled by a surfeit of misinformation, lies, and myths.

Too much blather, not enough factual information.

Speaking of blather, it’s time for me to stop writing. It is easy enough to list the problems. I wish I could suggest some surefire solutions, but I don’t have any.

To sum up: I don’t  think America needs to change direction; rather, I believe we need to restore balance.

2 thoughts on “America, Out Of Balance”