CANNON POWER SHOT SX 160 — WHENEVER I’M BUYING NEW TECHNOLOGY, I ALWAYS WONDER: “DOES EVERYTHING I NEED COME IN THE BOX?” IN THIS CASE ‘YES,’ ALTHOUGH A PROTECTIVE CARRYING CASE WOULD BE A NICE ADDITION.

You want to know what an obsolete bachelor’s degree  feels like? Long time ago, as part of my journalism major at University of Maryland, I took a class on news photography. Although 135 mm film and Single Lens Reflex (SLR) cameras were state of the art in the 1960s, the journalism class provided us with older Yashika Mat cameras.

Today, I unboxed the very latest Canon digital camera. It can make an amateur photographer like me feel like a pro! Photography has come a long, long, way since I took that class.

The Twin-Lens Reflex (TWR) Yashikas were still in common use. I was provided one at each of the first two newspapers I worked at after college.  The film, black & white, of course, was 12 shots on a roll, each negative 2 1/4 inches X 2 1/4 inches, if my memory is correct. 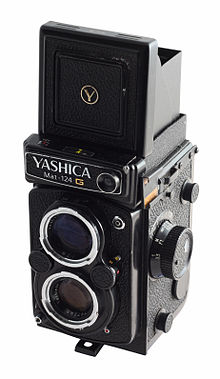 If you want to know what a TLR camera is, click here. You can’t buy one today, except as a novelty or collector’s item. If you see one, it probably means you’re in a museum.

We learned the basics of shooting news photos for the newspapers of the day; and how to process the film and make prints in the darkroom.

Newspaper photographers used ASA 400 film, which was fast enough to capture basketball or football action. The black & white ASA 400 produced grainy photos, but hey, anything better was wasted in the primitive reproduction of screened engravings on newsprint.

The large size of the Yashika film was handy for beginners learning to wind long strips of film onto stainless steel spools in total darkness. If the film was exposed to even a tiny ray of light, it was ruined. Handling the much smaller, 36-shot, rolls of 135 mm film in the darkroom required patience and manual dexterity. After the film was on the spool, it was placed in a canister of developing chemicals for about five minutes. Then the film was dunked in “fixer,” which stopped the development process, and rinsed in water and hung up on a clothesline to dry. At this point it was safe to turn on the light.

Whew! After all that, you had negatives! When printing the negatives, a very dim red light was allowed in the darkroom. You placed the negative into a light machine, with a piece of light-sensitive paper below the negative. You turned the light on for a few precise seconds to be captured on the paper. This was more art than science. It sometimes took a few tries to get a print that was properly exposed. The photo-sensitive paper was placed into a pan of developer, then moved to a tray of fixer and rinsed in a tray of water. Viola! You finally had in your hands one dripping wet black-and-white print, which you held up and inspected in the dim red light.

This long preamble is necessary to explain why I’m in awe, 40 years later, of the revolutionary advances in photographic technology in my lifetime. Last week, I purchased a brand new, state-of-the-art, Canon Power Shot SX160 digital camera.

The just-released SX160 is not in itself revolutionary. It’s merely a small advance over the SX150. The number of mega pixels increased from 14 to 16, and the zoom lens capability increased from 12X to 16X. I bought the SX160 from Amazon for $199, less than if I had bought it direct from Canon. The SX160 was so new it wasn’t yet available in Walmart. But Walmart is now selling it for the same price as Amazon, $199.

Digital photography was introduced in newsrooms in the 1990s. Early digital cameras were expensive! In 10 years prices came down enough for digital to become widely adopted by the public. Today, the Kodak film business is about kaput!

I started blogging on WordPress in October 2007 (marylandonmymind.com), and for more than a year my posts were nothing but words. These days, a blog without photography or video is a rarity. In 2008, I finally bought my first digital camera. I was very poor, but I picked up a digital camera made by, of all people, Polaroid, the company that pioneered instant photography. I think Walmart was closing out its stock and I got the Polaroid for less than $100. It was an 8.3 megapixel camera with a 3X zoom lens. It took sharp pictures shooting without the zoom at close range, in good light. Nearly all the photos on my blogs between 2008 and October 2012 were taken with the Polaroid. The two photos of the new Canon at the top of this post were taken by the Polaroid, which is now retired. I enhanced nearly all the Polaroid photos using iPhoto on my MacBook, a tedious and time-consuming process.

The Polaroid digital camera was, of course, in a universe far removed from the antique Yashika film camera and even most 135 mm cameras. But the Canon Power Shot 160 is light years ahead of that obsolete Polaroid. I’m quite pleased with myself for living long enough to buy such a marvel of technology for $199.

I won’t attempt an in-depth review of the Power Shot SX160 here. Suffice it to say that the lens, which is the most important part of a camera, is far superior to that of the old Polaroid. It’s capable of taking pictures in relatively low light without flash. The zoom photos seem to be perfectly crisp and in focus.

All the photos from recent posts of baseball at Nationals Park in Washington were taken with the Power Shot, and a few more are below. You can see the difference for yourself. I cropped the Power Shot photos on iPhoto, of course, but most of them were not further enhanced in any way. So far, I only know how to use the “automatic” mode on the Power Shot. What you see is state-of-the-art point-and-shoot photography for dummies. I think it’s better than the finest professional newspaper photography of my youth.

Remember the phrase, “The power of the written word?” And, “The pen is mightier than the sword.” With the advent of photography, many people came to believe that “A picture is worth a thousand words.”

The Power Shot SX160 is truly power in a box. It has many modes for specialized photography, and of course it takes video as well. If I have one complaint, it is that the 32-page “Getting Started” pamphlet provides only a basic introduction to this marvelous camera. If you want to go beyond “automatic” point-and-shoot, the real manual is on a disc that can be loaded into a computer to be read on-screen or printed out. I guess younger, more tech-savvy folks than me are comfortable with hundreds of pages of instructions online or on disc. For me, it’s a major barrier to learning to take full advantage of the camera’s many capabilities. (The disc also contains Canon software. I can only guess that if you load the software on your computer, it improves the handling of your Cannon photos.)

Not everything I learned in Journalism School at the University of Maryland is obsolete. The basic principles of journalism remain unchanged. But looking back over a long career, it’s clear that my bachelor’s degree was only a starting point. I’ve had to learn and adapt to changes that were unimagined when I was in college.

Think about it: Letterpress to offset to computer pagination. Typewriter to primitive computers to Windows and Word, and now to iPhones and iPad. Twin-lens Reflex (TLR) Yashika to Single Lens Reflex (SLR) 135 mm camera to digital cameras. Newspapers to blogging.

I wonder how the rapid advance of technology has changed us as a society and as human beings?

We are dangerously complacent. We take complex technologies for granted. We believe the technologies at our fingertips are necessary, that we can’t live without them. Power to change the world and rule the world comes in small boxes.

Below, a few photos taken with the Power Shot SX160:

A view of seats in the upper deck.

I think my blogs will contain more good photos from now on, and hopefully, fewer words.