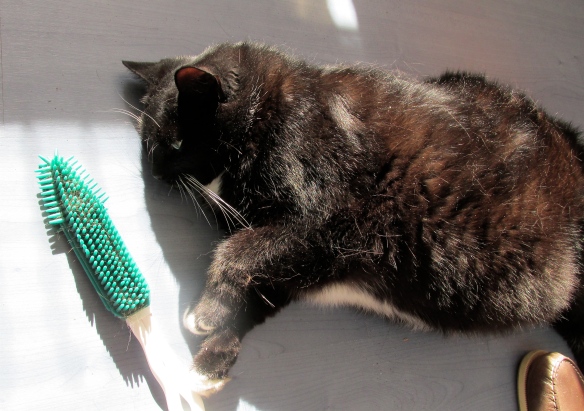 I really need to brush Lola more often. And use the flea comb! Next time, I’m getting a short-haired cat that doesn’t shed.

Took Princes Lola in for her long overdue rabies shot yesterday. A fox has been sighted in our neighborhood, which reminded me about rabies. Lola cried all the way to the vet’s in the car, but was quite content once she knew we were homeward bound. I think she actually enjoyed the attention.

Turns out Lola lied to me about her age. I thought she was 6 years old, but the vet estimates she’s 9 or 10. I shouldn’t be surprised. She never was a bundle of energy, but lately she’s been acting like she’s retired, spending most of her time napping.

She’s beginning to develop cataracts, the doc says. It’s normal.  He doesn’t think she’s in danger of going blind. In fact, Lola’s eyesight is excellent. She keeps it sharp by studying birds and squirrels in the yard, when she’s awake.

Lola also received two other routine preventive shots. And the vet says she’s got fleas — a lot of fleas. Hard to see fleas on a black cat, you know. That’s my excuse. What do you expect, when we live on the edge of a swamp? Fleas are the least of my problems. You should see the mosquitoes and spiders, in season. I just hope Lola doesn’t bring home any deer ticks.

The doc dabbed a generous dose of flea killer on Lola’s neck and back.  He suggested I treat her for fleas every two or three weeks, rather than the four that’s recommended on the flea med packages. The doses on the commercial flea meds are designed for 12-pound cats, he explained, and Lola now tips the scales at 19. He also warned that my house is probably infested with fleas. But I have bare floors, so I doubt it. Nothing like living simply.

Other than the cataracts and fleas, Princess Lola is in extreme good health for a cat of a certain age. Total bill for three shots and the exam, $87. I now have the rabies certificate proving that I’m a responsible pet owner.