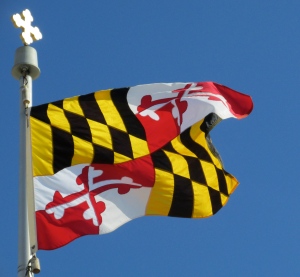 If you haven’t read Part 1 of this series, you can find it here.

The House of Delegates gun control vote yesterday, 78-61, looks strangely familiar. It’s nearly a carbon copy of the recent gas tax vote, 76-63. What’s up with that?

If you think Maryland is a deep-blue state with an invincible Democratic majority, those two votes seem hard to explain. Democrats hold a majority, 98-43, in the House of Delegates.

But looking closer, it’s clear that Maryland isn’t immune from the blue-red divide afflicting the rest of America. Far from it. The gas tax and gun control both passed by much smaller margins than 98-43. Significantly, such narrow margins are a persistent trend, reflecting the real political divide in the state.

For a relatively small state, Maryland is surprisingly regional. It has mountainous Western Maryland, densely populated Central Maryland, the rural Eastern Shore, and Southern Maryland, which has been rapidly changing from rural to suburban. The state is composed of 23 counties and Baltimore City, for a total of 24 jurisdictions.

Here’s  the important part: Only five jurisdictions out of a total of 24 can fairly be identified as blue. They are Montgomery, Prince George’s, Howard and Charles Counties, and Baltimore City.

Most of the population — and most of the votes, including the Democratic majority — are concentrated in Central Maryland, along the I-95 corridor. The core of Democratic strength is in the blue “suburban” counties surrounding Washington, D.C., followed closely by Baltimore City and Baltimore County.

The outlying suburban counties (Harford, Frederick, Carroll) tend to be Republican red. The rural counties of Western Maryland and the Eastern Shore are bright red.

The two other, smaller, blue counties, Howard County and Charles County, provided four votes each for the gas tax. Grand total for the five blue counties, 69 votes, only two short of a majority.

(For the sake of completeness, tiny Somerset County on the Eastern Shore votes Democratic by narrow margins. In 2012, Somerset went for President Obama by a margin of 198 votes out of about 10,000 votes cast. Somerset is honorary blue. Go Somerset!)

The final vote in the House of Delegates was 76-63 for the gas tax, with all Republicans voting against, and two Republicans absent. That means the bulk of the Democratic votes came from only five blue jurisdictions. The rest of the state — the other 19 jurisdictions — provided seven votes that pushed the bill over the victory line. The “other 19” provided 56 votes against the gas tax. You can see how sharply Maryland’s blue jurisdictions are divided from the red counties.

The House 78-61 vote for gun control was even more concentrated in the big three jurisdictions. Every single delegate representing Montgomery County, Prince George’s County, and Baltimore City, voted in favor of gun control. (One Baltimore delegate was absent.) How concentrated is the Democratic majority? Every delegate (and every state senator) representing the “big three” is a Democrat. Not a single Republican delegate among them.

The 10-2 Anne Arundel vote is significant. In 2012, Anne Arundel was a virtual tie vote, 126,635 for President Obama, and 126,832 for Romney! Anne Arundel makes a large contribution to the statewide Democratic total in presidential years.

But in General Assembly elections, Anne Arundel is definitely red. The votes in the House of Delegates make that crystal clear. In state and local elections, it’s increasingly difficult for a Democrat to win anyplace in Arundel, other than Annapolis.

Now we come to the most interesting place, Baltimore County. Democrats usually turn out a Democratic majority, by varying margins, in presidential years. But it’s a big county, and some parts definitely favor Republicans in General Assembly elections.

But don’t be fooled. Baltimore County’s General Assembly delegation is dominated by Republicans and conservative Democrats. And Baltimore County is perfectly capable of voting for a popular Republican in a statewide race for governor or U.S. senator.

Baltimore County is blue for Obama, but red in the General Assembly. Go figure. The off-year election in 2014 will be a test for Democrats in Baltimore County.

We’re not finished. In Part 3, we’ll take a closer look at some of the borderline districts.