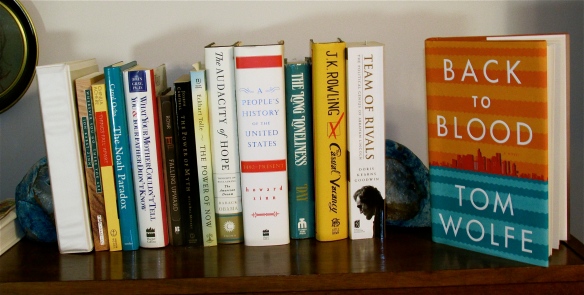 Grisham was born in 1955 and Connelly in 1956. With that one-year head start, Grisham holds a slim lead over Connelly.  Score in books published: Grisham, 28; Connelly, 27, if I’ve counted correctly. Can’t get much closer than that.

I suspect Grisham holds a lead in career earnings, but who cares?  Eight of Grisham’s bestsellers have become successful films, starting with “The Firm” and the “Pelican Brief” in the early 1990s.

The two authors came to writing by different routes, and that has made all the difference in their points of view.

Grisham, who has written extensively about lawyers and judges in the South, received a law degree from Ole Miss and practiced law for a decade in Mississippi before publishing “A Time To Kill” in 1988.

Connelly majored in journalism and paid his dues covering the police beat for two newspapers in Florida, and raised his profile with three more years on the crime beat at the Los Angeles Times.

(Full disclosure, I majored in journalism too, and worked for a number of newspapers. But that’s all I have in common with Connelly. Maybe I should have studied law, like Grisham.)

After his long apprenticeship as a reporter on the police beat, Connelly published his first book, “The Black Echo” in 1992.

So here’s the deal: With his newspaper and police beat background, Connelly writes about law mainly from the perspective of a police homicide detective.

With his background as an attorney, Grisham writes from the perspective of lawyers, and sometimes judges.

Now, once again, the hour is getting late. This wayward essay, written without benefit of an outline, is going to spill over into Part 3, tomorrow. I don’t know details about Grisham’s and Connelly’s writing habits. I have a feeling they probably use outlines.

In my own defense, Stephen King is one successful author who prefers to write without an outline, as disclosed in his memoir, “On Writing.” For more thoughts about writing, click here.

What do you think about Grisham and Connelly, and their books? If you don’t see a comments box directly below, look for and click on the tiny “Leave A Comment” line at bottom right.