Remind me again: Why do we need ANOTHER blog about “simplicity?” 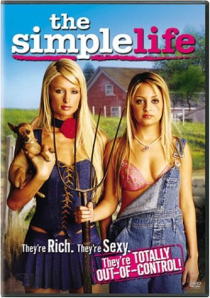 Everything you need to know about simplicity. NOT. Here's the cover for "The Simple Life" DVD, with Paris Hilton and Nicole Richie.

Is there anything left to say about simplicity — or frugality, for that matter — that hasn’t already been covered? We even had a popular TV “reality” show, “The Simple Life.” If it’s been on TV, who needs a blog?

I have a whole shelf of books about simplicity, and there must be thousands of blogs and Web sites on the subject.

I intend to add a separate page to this blog, listing and reviewing books about simplicity (when I get around to it.) In the meantime, to give you a sense of where I’m coming from, here are three of the best on my bookshelf:

The Greening of America and Small Is Beautiful were groundbreaking, pop-culture hits. Nearly three decades later, Graceful Simplicity had a more subdued impact.

As for blogs and Web sites, I intend to provide links to many that I like the best. Already, the short list in my sidebar has links from AARP to Zen.

So who needs another blog about simplicity — specifically the blog you’re reading right now, “Life After 60, Simplified?”  I really can’t justify it, except to say that it’s a matter of perspective. Once, I had an office with a window on the ninth floor. Across the street was a church and a high school. I memorized the air-handling equipment and watched the repairs on the flat roof of the church. I could read the greetings of bygone graduating classes, spray-painted on the pitched roof of the high school. I could even see the athletic field on the other side of the school. I knew that summer was nearly done when I saw the football team begin morning drills in the August heat.

The tops of the roofs of the church and the school were hidden in plain sight. I could see them clear as day, every day, because of my perspective from the ninth floor. But pedestrians on the street had not a clue about the roofs of the buildings, or the practice field beyond.  That information was not visible or knowable from street level.

So you might even call this blog “Simplicity for Beginners” or “Simplicity 101.”  Other bloggers will understand this next sentence: Whether or not anyone really needs to read this blog, I need to write it.

Welcome to Life After 60, Simplified. Your contributions and comments will be appreciated.