MAYBE THE FISCAL CLIFF LOOKS LIKE THIS sand dune in Ocean City, Maryland, after some serious pounding by Hurricane Sandy. A sudden drop off at the top, followed by a sloping hill of sand.

Ever notice how the terminology we apply to important issues in the public sphere can blow things all out of proportion.   For example:

The metaphors we attach to important issues aren’t always a good fit. We’re stretching, trying to attach the drama and urgency of violence to abstract political or economic concepts.

The “Battle of Britain” really was a fierce battle in the skies over Britain. The “War Between the States” — well, it sure was a war, all right, fought between two groups of states. “Pickett’s Charge,” was an actual charge, led by Gen. George Pickett. The “Battle of Gettysburg” certainly was a battle.

Somebody “Crossed the Rubicon” River way back when, and apparently there was no turning back. (I wasn’t there.) “The War of Roses” stumps me, I must admit.

Japan declared war on the U.S. at Pearl Harbor, and President Roosevelt called it a “Day that will live in infamy.” That doesn’t seem like an exaggeration. Then Roosevelt and Congress declared war on Japan. Really! No fooling.

But I digress. Returning to the original point, you can have a war against another nation or another army, but how do you have a “War on Drugs?” Did we get a little carried away? Did the word “war” lead us to start shooting, spying on, and capturing an imagined “enemy?” Did a lot of people die and a lot of people go to jail for a cause that was empty hyperbole? (“Hyperbole.” You could look it up. That’s what I did.) What if we had called it the “Regulatory Reform of Certain Addictive Pharmaceuticals?” It might have been a whole different thing.

What the heck is a “Death tax?” Does it involve blood, or grave-robbing? Whatever, “death tax” was an inspired political creation, making the “inheritance tax” look kind of boring.

And now we come to the dreaded “Fiscal cliff.” TV commentator Lawrence O’Donnell prefers to call it a “Fiscal curb.” Going off a high cliff implies an inevitable deadly crash far below. Going off a curb is simply the first step in crossing the street, to get to the other side.

What is this so-called “Fiscal cliff” we’re facing on Jan. 1?  It’s cuts in federal spending and restoration of “temporary” tax cuts to previous levels. It was agreed to by Congress and the President during the past year. Is any of it really all that drastic? Haven’t people been shouting that we absolutely must reduce spending? And haven’t other people said it would also help close the budget deficit if we restored some taxes to previous levels? What’s so revolutionary about it? What’s all the shouting about? 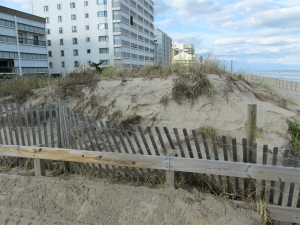 SIDE VIEW OF THE SAND DUNE SHOWS THAT MOST OF THE DUNE REMAINS STANDING TALL, EVEN AFTER THE SHARP EROSION TO THE FRONT OF THE DUNE.

Returning taxes for everybody to the Bush-era levels might be a drag on the economy. Ending the “alternative minimum tax” apparently would hit some middle-class families hard. Some people think the military spending cuts would be too much.

But haven’t some reasonable-sounding people suggested that we need a “balanced approach” including both spending cuts and revenue increases? This “fiscal cliff” thing includes both. I don’t know if you could call it a “balanced approach.” But if Congress could negotiate a few refinements, it might turn out to be sort of balanced.

What we’re facing Jan. 1 is definitely not is a high cliff with an inevitable crash at the bottom. Just my opinion. More likely it’s a somewhat abrupt slide a few feet down the side of a sand dune, with a soft landing at the bottom. If some parts of the package hurt too much, Congress can make adjustments in January and February.

4 thoughts on “How High Is A “Fiscal Cliff”? What Happens At The Bottom?”