Thursday, Jan. 23, 2014, third day and night in a row of frigid Canadian temperatures, from the MidAtlantic to New England. And of course worse in the Midwest. Minnesota seems to be the coldest place on Earth, or at least in the U.S. Why do people live there? Don’t they know America is a free country? No passport required to cross state lines. 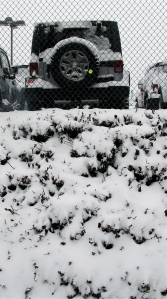 This kind of cold is worse than normal, even in New England. Here in Maryland, it’s almost a once-in-a-lifetime thing. Assuming that you live through it.

Tuesday overnight into Wednesday, the day and night of Winter Storm Janus, we had reported nighttime lows of 7 in Washington, D.C., and ONE degree above ZERO here in Gaithersburg, MD, about 45 miles Northwest of the Capitol building. Winds that night were gusting from 15-35 mph. Wind-chill factor? Don’t ask. An hour’s drive farther northwest, Hagerstown recorded a ZERO that night. And Hagerstown is still in Maryland!

I don’t think the temperature rose out of the teens during the day Wednesday, but the sun was out. Apparently the bright sunshine somehow has the power to melt and evaporate at least some of the ice on the roads. By noon, people were getting back to normal, except for schools, which remained closed, third day in a row.

Overnight Wednesday into Thursday was about the same as the first night, but with winds more like 5 mph. Today, Thursday, business and transportation seems nearly back to normal, except for the temperatures. Still in the teens during the day, and going down to single digits tonight.

We might break out of the teens into the 20s Friday. Finally, on Saturday, temperatures are expected to climb slightly above freezing. Enjoy it while it lasts. Starts getting colder again Sunday, and next week will feel about like this week, according to folks who claim to know.

What is this crazy, freezing weather? I guess it’s all attributed to the jet stream shifting far to the south, allowing the Polar Vortex to escape from the North Pole and descend to freeze the entire Northeast and MidAtlantic, some days dipping into the deep South. It’s not even warm in Florida or South Texas.

Due to other pressing business, as the lawyers like to say, I failed to post the snow photos Tuesday night as expected, or even Wednesday. I hope to post a good selection of Tuesday’s storm photos in the wee small hours of Friday, but off course it’s now the day-before-yesterday’s news.

1 thought on “Extreme Arctic Cold, Going Into The Third Night”