The Maryland League of Conservation Voters map of endorsed candidates is here. Easy to click on your own legislative district for endorsements.

Most of the Maryland General Assembly candidate endorsements are clustered in the Baltimore-Washington urban-suburban area.

I’m shore that Judy Davis would welcome campaign contributions from loyal Democrats and green voters. Her motto, “Teacher, Mother, Volunteer.”  (This message has not been authorized or approved by any candidate. Just sayn’)

Del. Norm Conway in District 38B has won environmental group endorsements in the past, but was not selected by the League of Conservation Voters this year. 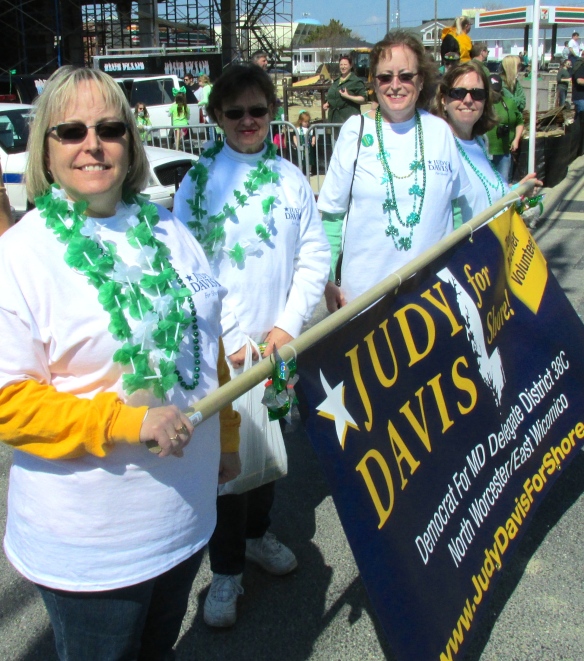 St. Patrick’s Day parades mark the start of election year in Maryland — more so than ever this year — because primaries have been moved up to June. Three months from St. Pat’s Day to Election Day. Nearly every Maryland city and town had a parade this weekend, and nearly every serious candidate — both Democrats and Republicans — was marching (or sometimes riding in a convertible.) Let the record show that Saturday was a perfect, sunny day for a parade in Ocean City.

Democrats hold a solid majority in Maryland’s General Assembly. Republicans, as always, hope to improve their minority position. They might pick up a seat or two, but that’s about the limit. Democrats have better candidates nearly everywhere in Maryland.

A case in point is District 38, located in the far southeastern corner of the state, the Lower Eastern Shore (Worcester County, Somerset County, and part of Wicomico County). District 38 will likely have some of the closest and most hard-fought elections in Maryland this year. Let me explain.

Many people presume that the Lower Eastern Shore leans Republican, either slightly or severely. History and election results indicate otherwise.

Four years ago, Democrats gained a Senate seat on the Lower Shore when Jim Mathias, former mayor of Ocean City, defeated a Republican businessman. In 2014, Democrats have every reason to expect to hold the Senate seat AND pick up one or even two seats in the House of Delegates. But it’s hardly a foregone conclusion.

Neither party will have competitive legislative primaries in District 38. All the action — and it could be hot– will be in the November General Election. Both sides are already hard at work. 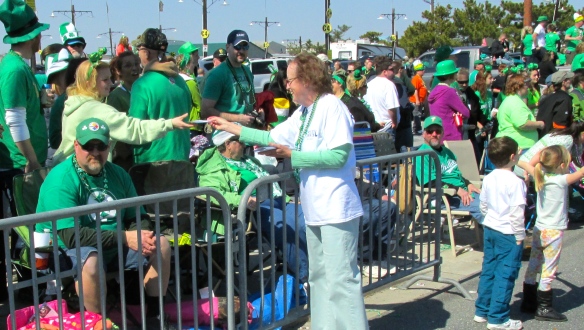 Did we mention superior Democratic candidates?

Sen. Jim Mathias has never lost an election. He’s been elected once to the House of Delegates and once to the State Senate. Before that, he was elected councilman and mayor repeatedly in Ocean City. Mathias faces a serious challenge from one-term Republican Del. Mike McDermott. It will be a hard-fought contest, but McDermott simply doesn’t match up well against Mathias in terms of experience, gravitas, or fund-raising ability. Mathias won a squeaker by 640 votes in 2010, and only after a recount. The 2014 results will likely be close, but not that close. I see Mathias winning by 3,000 to 5,000 votes. www.jimmathias.com

After the 2010 Census, District 38 was divided into three single-member districts for House of Delegates. Republicans have two of the three delegates now, but they might be in trouble. In reverse order:

Judy Davis chatting with voters before the parade.

District 38C — Democrat Judy Davis (her brand:  Teacher, Mother, Volunteer) should cruise to victory against Democrat Mike Hindi in the June primary. Davis will probably be outspent in the General Election by her Republican opponent, Mary Beth Carozza, who has not lived on the Eastern Shore since she graduated from high school. District 38C includes northern Worcester County (Ocean City, Ocean Pines, West Ocean City, Bishopville), and the rural northeastern part of Wicomico County. www.judydavisforshore.com

Ms. Carozza returned to the Shore last year specifically to run for the open delegate seat. Republican operatives from Washington, D.C. where Carozza had a career in Republican politics, are funding her campaign big time. But it will be hard to buy an election in this small-town, one-delegate district, where people know each other. Judy Davis has lived and taught school here for decades. Davis is a graduate of the Democratic Emerge Program, which prepares promising community leaders like Judy to run for public office. I think Democrats, seeing the opportunity to pick up a seat, will give her strong support.

District 38B — Del. Norm Conway, chairman of the House Appropriations Committee, has no primary opposition and is nearly a lock for re-election in November against a Republican named Carl Anderton Jr.  Del. Conway is the only delegate from the entire Eastern Shore with any clout in Annapolis. His support in his Salisbury district is nearly unshakable. (See what we mean by superior Democratic candidates?)

District 38A — May lean by a hair to the Democrats. 38A includes all of Somerset County and the southern half of Worcester County, including Pocomoke City, Snow Hill and Berlin. In 2012, President Barack Obama won Somerset County by a handful of votes. The Democratic candidate, Percy J. Purnell Jr. is a definite threat to unseat one-term Republican Del. Charles James Otto. Otto is quite popular in the Somerset County part of District 38A. I give Otto a slight advantage in a close race in Somerset. But the election will be won or lost in the Worcester County part of the district. The outcome will depend on which party can turn out its voters in this sprawling rural subdistrict.

To recap: District 38 is currently represented by two Democrats and two Republicans. The two Democrats, Sen. Jim Mathias and Del. Norm Conway are likely winners in 2014. The other two delegate seats will be close races. I give the edge to Democrat Judy Davis in 38C and Republican Charles Otto in 38A, with Democrat Percy J. Purnell Jr. making a strong challenge and possibly edging Otto. A Democratic sweep in this district would be a painful loss for the minority Republicans.

A prolonged siege of rain, high wind, and flooding is expected. It’s raining now (1:30 p.m. Sunday afternoon), with some very localized flooding already. But the worst is not expected until Monday afternoon and Monday night.     END_OF_DOCUMENT_TOKEN_TO_BE_REPLACED