Chief Buzzuro’s comments on one particular issue touched a nerve with me:

“We talk about beer bongs, underage drinking, explicit T-shirts and there are still merchants that sell knives. Why does anyone need to sell knives on the Boardwalk? They are not Swiss Army knives by the way, just for clarification.”

END_OF_DOCUMENT_TOKEN_TO_BE_REPLACED

I’ve survived another season working in the hospitality trade in Ocean City, MD, and lived to see another Labor Day! Thank God! Wish I could say this was the best season yet in Ocean City, but that would not be true. Not planning to do it again next summer.

The beach motel will close for the winter in a few weeks, and after that, I will be Retired! Looking forward to whatever comes next. — John

Grand cottages on the water, vacation homes of the one percenters. They make a pretty picture. They’re located in West Ocean City, not far from the Route 50 Bridge. The picture was taken with a zoom lens from across the bay in South Ocean City.

A thought-provoking quote from Joan Didion. Thought provoking for anyone at any stage of life. Perhaps more thought provoking for those of us on the cusp of retirement, which is the transition from a life of work to . . . what?
Ms. Didion’s comment, “I don’t think that progress is necessarily part of the package,” particularly caught my eye. The weekly newspaper in my Maryland beach town had an editorial this week that began thus: “From a public relations standpoint, this has been the summer from hell in Ocean City.” My first reaction on reading that sentence was, “The editor is going to regret those words.” Maybe so, but at least he was seizing the moment, taking the risk. Civilization seems to be in decline. — John Hayden “I’m not telling you to make the world better, because I don’t think that progress is necessarily part of the package. I’m just telling you to live in it. Not just to endure it, not just to suffer it, not just to pass through it, but to live in it. To look at it. To try to get the picture. To live recklessly. To take chances. To make your own work and take pride in it. To seize the moment. And if you ask me why you should bother to do that, I could tell you that the grave’s a fine and private place, but none I think do there embrace. Nor do they sing there, or write, or argue, or see the tidal bore on the Amazon, or touch their children. And that’s what there is to do and get it while you can and good luck at it.” 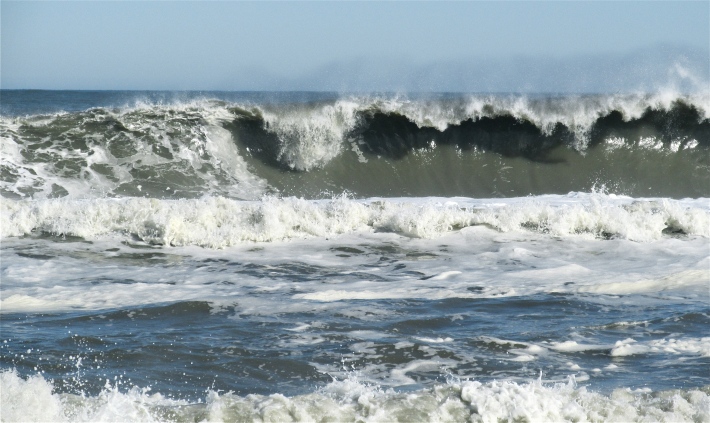 Earlier in the week, the last storm of winter rolled up the East Coast, bringing snow inland, but only rain and sustained high wind here on the Atlantic shore. The rotation of the storm caused strong winds to push ocean water onto the beach and into the coastal bays behind the barrier islands.

The onshore winds continued through four or five tide cycles on Wednesday and Thursday. Sand (above) was blown and pushed up to and over the sea wall and onto the boardwalk in places. But there was no damage to the boardwalk. The sea wall did it’s job. Some buildings in Ocean City sustained wind damage to siding, and some signs were blown over. A little beach erosion. But generally, I think the storm was pushing sand up on the beach, rather than washing it away. — John Hayden

More photos of the surf, taken between 3 and 4 p.m. Saturday, as the high tide came in: 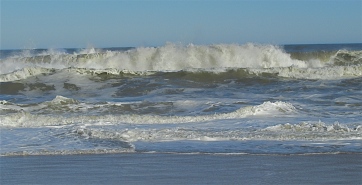 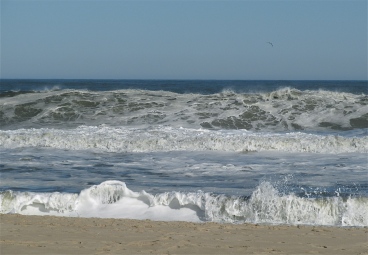 Fiscal cliff? Nor’easter? Thanksgiving, Christmas, New Year’s! It’s too much, too fast. Stop the news! I want to get off.

Doesn’t my apartment need serious cleaning? Wait. Don’t I have some bills to pay, like yesterday? Don’t I have a prescription to pick up? I could fold the laundry, unload the dishwasher, brush the cat.

I need an emergency nap. 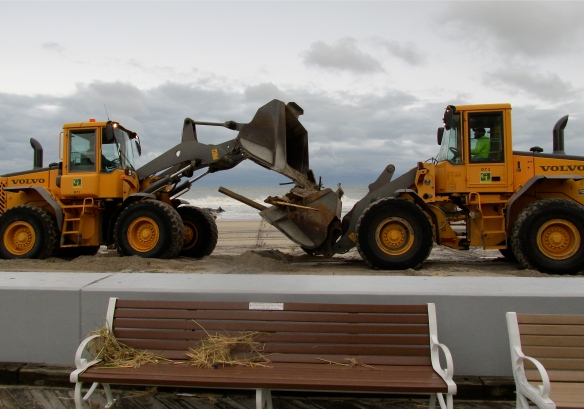 Surreal photos of the Ocean City, Maryland, beach and sky Tuesday, Oct. 30, 2012, the day after Hurricane Sandy made landfall in New Jersey and moved inland. Photos made possible by my new digital camera. No extra charge for the words. 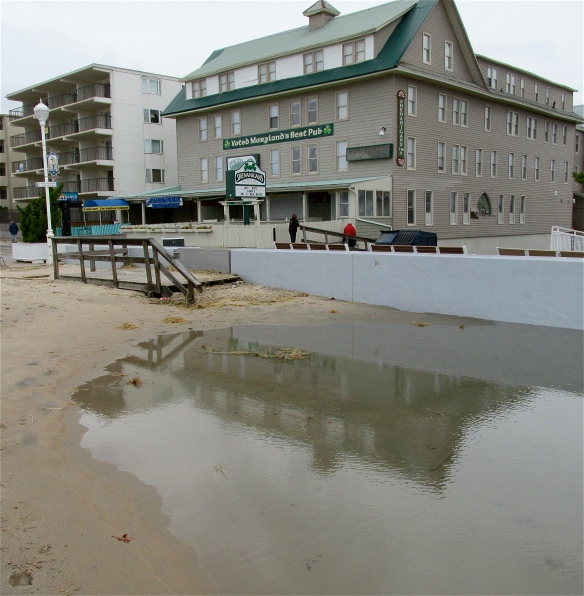 Shoreham Hotel with Irish pub @ 4th St. stands tall after the storm, reflected in a pool of water deposited at the base of the boardwalk sea wall by Hurricane Sandy. 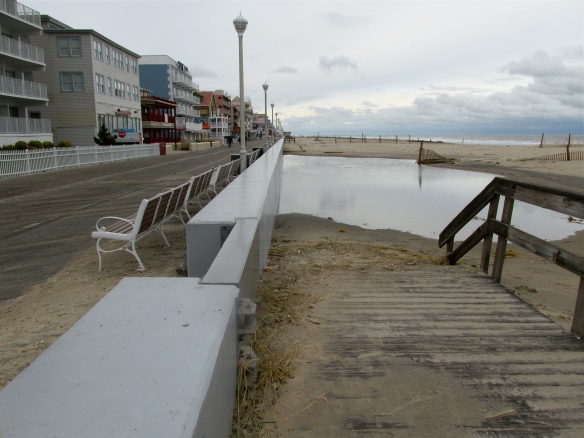 The little sea wall that saved the Ocean City boardwalk from Hurricane Sandy. How close did the ocean come to the boardwalk? This close, and more.   END_OF_DOCUMENT_TOKEN_TO_BE_REPLACED

A car tries to navigate a West Ocean City street which flooded at high tide about 8 a.m. Monday morning. The water has since subsided, but another high tide is coming this evening.    END_OF_DOCUMENT_TOKEN_TO_BE_REPLACED 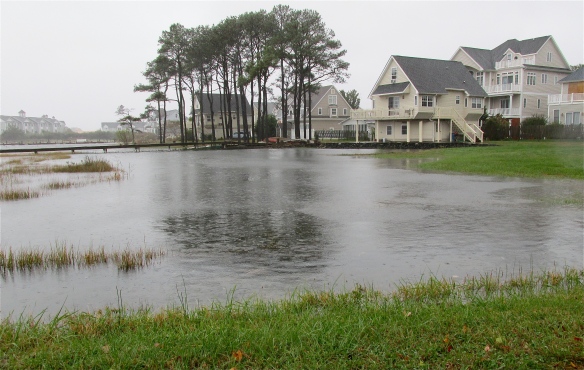 Rising water from the marsh creeps closer to houses not far from where I live in West Ocean City. Taken Sunday afternoon. I guess there’s a reason they call this “wetlands.”

10:30 p.m. Sunday, still above water in West Ocean City, MD. (Although my roof is leaking again.) Just finished writing a detailed news report over at Ocean City Blog. It’s raining hard and the wind’s picking up. But this baby is only beginning. They’re calling Sandy a hybrid hurricane/nor’easter now.    END_OF_DOCUMENT_TOKEN_TO_BE_REPLACED

A prolonged siege of rain, high wind, and flooding is expected. It’s raining now (1:30 p.m. Sunday afternoon), with some very localized flooding already. But the worst is not expected until Monday afternoon and Monday night.     END_OF_DOCUMENT_TOKEN_TO_BE_REPLACED