If you love books, please do not read “CHEAP WORDS: Amazon is good for customers. But is it good for books?”

For the fearless reader, the scary, in-depth report by George Packer about Amazon.com may be found in the Feb. 17, 2014, issue of The New Yorker, filed under “Reporter At Large.” Don’t say I didn’t warn you.

On the positive side, if you own stock in Amazon, Mr. Packer’s comprehensive report might make you fall in love all over again:

“The combination of ceaseless innovation and low-wage drudgery makes Amazon the epitome of a successful New Economy company.”

You could credit Amazon with creating jobs. But in the not-too-distant future, most of those warehouse picking and shipping workers will likely be replaced by robots. And whether we believe it or not, in the long run Amazon just might deliver books, and other merchandise, by drone. (Books are now a small part of the company’s business. Amazon is a digital general store, selling nearly everything under the sun.)

I’m not going to give away the whole Amazon love-hate story, which is too long for most of us to read on a computer screen. I printed it out, and it came to 25 letter-sized pages. It’s a must-read for everyone who’s interested in books and/or the publishing industry, so long as you can handle the heartbreak. I’ll give you a taste of Mr. Packer’s judgement:

“Lately, digital titles have leveled off at about thirty per cent of book sales. Whatever the temporary fluctuations in publishers’ profits, the long-term outlook is discouraging. This is partly because Americans don’t read as many books as they used to — they are too busy doing other things with their devices — but also because of the relentless downward pressure on prices that Amazon enforces. The digital market is awash with millions of barely edited titles, most of it dreck, while readers are being conditioned to think that books are worth as little as a sandwich.”

And now I’ll localize the story a bit, which is an editor’s oldest trick on a slow news day. Here in the metro Washington, D.C. area, the newspaper many of us rely on for our news, The Washington Post, has been purchased by Amazon founder Jeff Bezos. Will the sale lead to the newspaper’s salvation or its continued demise?

The book was published the last week of September, and already “The Casual Vacancy” has hit No. 1 on bestseller lists.

J.K. Rowling’s first novel for adults is No. 1 on the New York Times lists for hardback fiction, combined fiction and nonfiction, and eBook fiction. The three “Fifty Shades of Grey” books have been pushed down to second, third and fourth places  on the lists.

Casual Vacancy also is listed first for in-store hardback sales at Barnes & Knoble. Surprisingly, the book is only No. 8 on B&N’s list for Nook eBooks.

On Amazon, Casual Vacancy is listed No. 3, behind something called “The Mark of Athena” by Rick Riordan, and “Killing Kennedy: The End of Camelot,” by Bill O’Reilly. 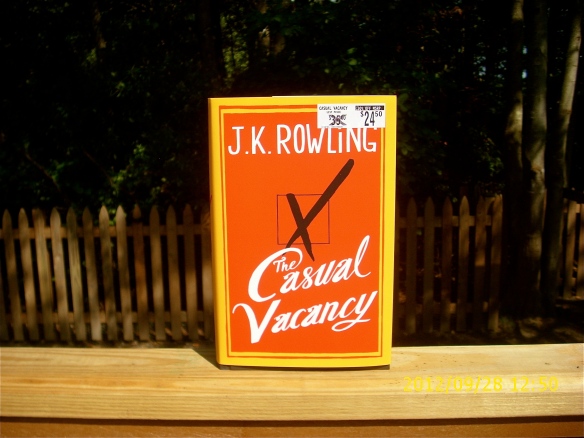 The Casual Vacancy may signal a turnaround for quality in popular fiction. Where can it go but up, after “Hunger Games“ and “Fifty Shades of Grey?”  Talk about your lowest common denominator!

I plan to do one of my serialized book reviews for Casual Vacancy, with updates posted every few days, as I read.

END_OF_DOCUMENT_TOKEN_TO_BE_REPLACED 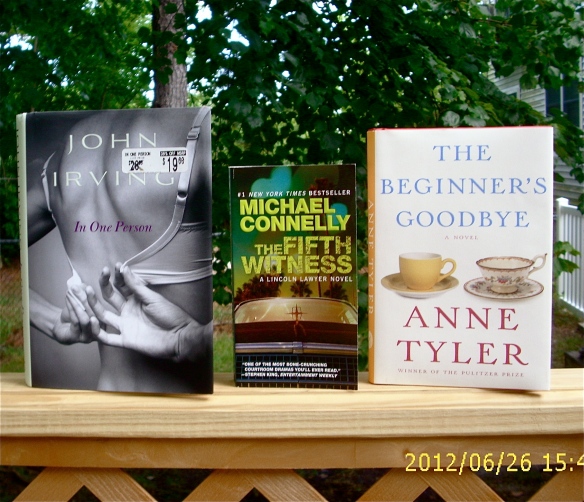 When I bought my Nook last winter, I was hoping to buy e-books at lower prices than hardbacks and paperbacks. But prices aren’t necessarily lower in the digital world.

END_OF_DOCUMENT_TOKEN_TO_BE_REPLACED

BLOGGING TIP NO. 101. NO MATTER THE TITLE OR CONTENT OF YOUR BLOG, YOU CAN GET MORE ‘HITS’ BY INCLUDING A PHOTO OF YOUR CAT. HERE SHE IS, LOLA, THE BLACK CAT WITH THE LONGEST WHITE WHISKERS IN THE WORLD. Photo by Lola’s personal staff photographer.

Thanks for reminding me! Yes, besides changing the blog theme (the appearance of the blog), I’ve also fiddled with the name. Again! The old theme, in case you’re wondering, was called “Twenty-Ten,” and the new theme is “Chunk.” Both are great themes, available free on WordPress.com.

When I started this blog back in 2009, I thought I had a great name:   I was going to focus on — you guessed it — the life and times of those of us who’ve passed the big SIX-OH, with special attention to living simply and frugally after age 60.

Before long, I started writing more and more about dysfunctional politics and economic meltdown. (I know, “Boring”). I had this inspiration for a new name:   It sounded like a cool name. Catchy. Maybe it was just a phase I was going through. At least it was better than

Now, I’ve shifted the focus again. The revolution in publishing — the surge of Indie publishing and Ebooks — fascinates me.   END_OF_DOCUMENT_TOKEN_TO_BE_REPLACED

The Black Swan effect, which I’ve written about before, might be the single most consequential concept of the 21st century. Just my opinion. If you’re interested in the phenomenon, you could read all about it in Nassim Nicholas Taleb’s book, The Black Swan. Subtitle: The Impact of the Highly Improbable.

Mr. Taleb suggests that most of the important events in history are Black Swan events, for example, the 09-11-2001 attacks on the World Trade Center in New York. For my other previous posts on Black Swans, click here and here.

Many events of lesser importance, which nonetheless have momentous effects on nations, industries, and individuals, may also be Black Swans.

As Mr. Taleb explains, a bestselling book is a perfect example of a Black Swan, because it’s impossible to predict in advance which book will be a bestseller.   END_OF_DOCUMENT_TOKEN_TO_BE_REPLACED

Is this a great time to be a writer, or what?
The title to this repost from David Gaughran’s blog tells exactly what the post is about, and the body of the post gives all the details about direct selling. No need for further comment from me. But I do have a question.
QUESTION: WordPress.com from the beginning has been almost fanatically opposed to advertising by bloggers. (Sorry WordPress, that’s my ONLY criticism of WordPress.com, which is by far the best blogging platform for me.) I believe WordPress.com has probably always made an exception for selling one’s own handmade goods (I might be wrong about that), and I guess handmade goods might include one’s own handwritten books. My question, David, is how is WordPress.com responding to this sudden surge in blogging by Ebook authors? Was WordPress.com OK with your recent sale of 99-cent books? I gather that you and many others are Amazon affiliates, and possibly affiliates of other booksellers as well. Do you think WordPress.com might crack down on this?
BTW, I tried switching my blog over to WordPress.org a few years ago, to gain more freedom, but found the technical hassle not worth the benefit. These days, WordPress will handle all the technical details of the switch for a fee, so it’s much easier now if you want to pay the fee.

Tammy Strobel blogs at “Rowdy Kittens” about simplifying her life, riding bicycles, and living in tiny houses (or as she puts it, finding “fulfillment in less stuff, less debt and less wage-chasing”). Simplicity! I’m in favor of it.

She has a print book scheduled for release in September.  The title is: “You Can Buy Happiness (And It’s Cheap).”

If we had a Pulitzer Prize for book titles, that would be a winner. You can see the cover and read a little more about her book here.  It’s nonfiction, and already listed for preorder in paperback on Amazon.com and Barnes & Nobel. I can’t wait to read it. I think I’ll probably order some happiness as well, since it’s cheap. Maybe I’ll buy happiness in large quantities, enough to share.   END_OF_DOCUMENT_TOKEN_TO_BE_REPLACED

A fellow writer-blogger asked about marketing. Viola! I immediately happened upon a highly informative piece posted today by Jen Talty over at Bob Mayer’s Blog, “Write It Forward.”   END_OF_DOCUMENT_TOKEN_TO_BE_REPLACED

I’ve run across a handy chart comparing the leading Indie Ebook self-publishing services. It provides royalty rates for each service, but beware: Some services are free, but keep a percentage of the author’s gross sales. Others charge fees.

You might also want to start by reading the post, “Digital Book World Self-Publishing Guide,” which is very concise, but probably doesn’t include any new information. The accompanying chart, which I found most helpful, is here.

I broke through the 50,000-word barrier on my WIP (that’s Work in Progress, for the uninitiated) a few days ago.   END_OF_DOCUMENT_TOKEN_TO_BE_REPLACED