Couldn’t resist posting one more video. A most energetic and inspiring older couple. I guess local food and organic food is possible. All you need is dirt and work.

A most interesting take on sustainable food and local food. I’m particularly fascinated by the part about training young people for meaningful work. A great alternative to college for many, perhaps.

Sounds like the new farmer-entrepreneur, Diana, and her husband, will be focusing on the chicken business, and also growing quite a variety of vegetables. Diana, aka “Farmer Di” and “Doodi,” is methodically learning all she can about how to be a successful part of the “local-food” movement. Click on the Clueless Farmer’s report below.  Her post includes lots of links to useful farming information.

This is a serious career-change event. Diana says: “My completely awesome husband turned down a perfectly decent and lucrative office job in favor of farming for a subsistence income.”

The real farming begins this week, with “100 fluffy day-old chicks and about 500 seedlings of various vegetables.” That sounds feasible on five acres, with some room for expansion.

If it works, the small-farm movement has potential to provide a great lifestyle, along with a modest income, for thousands of workers who would otherwise be stuck in dead-end jobs, and living in suburbia.

Producing and consuming our food locally (including organic food) makes sense, and it can improve our food security in times of shortages.

We closed on our 5+ acre “farmette,” somewhat disconcertingly noted by our bank’s appraiser as being a “suburban” home (by rural standards), this morning. We’re officially terrified. All our pretty plans on how much we need to spend to get so much revenue from so many square feet of some specific vegetable or chicken species seem suddenly very ethereal when juxtaposed with our actual expenses. I have been in Madison County, VA for 4+ days now, fo … Read More

via The Clueless Farmer 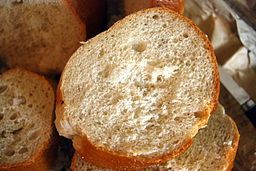 The stomach is more powerful than the brain.

Hungry people are desperate people. The leader who can give the people black beans and bread, that leader RULES. It’s something to keep in mind as you watch the political-economic turmoil in Egypt, and other troubled lands.

My high school “Problems of Democracy” teacher, Mr. Thomas, repeated the words “black beans and bread” often, as he explained the iron grip of oppressive regimes, particularly Soviet-dominated Eastern Europe in the 1960s.

Food inflation is often emphasized, when pundits list the grievances of the Egyptian people. Oppression, poverty, food shortages. There you have a recipe for revolution.

An arrogant answer like “Let them eat cake,” is a ticket to the guillotine. In the 21st Century, an arrogant answer of austerity, unemployment, and inflation might result in a one-way ticket out of the country.

Then there’s the short-sighted folly of using agricultural land to grow fuel, instead of food. I can hardly wait until some arrogant politician says, “Let them eat ethanol.”

I’ve heard that food shortages and inflation will likely worsen. Water shortages will soon be even more dangerous than food shortages. The food and water wars are only beginning.

The cozy comfort of family tradition took precedence, at the last minute, over the plan to simplify Thanksgiving.

Turkey-vegetable soup was replaced on the menu by a grand old turkey with all the trimmings. We were all so mellow after the dinner and wine that we didn’t get around to the pie at all on Thursday.  No problem, man. Apple pie warmed in the microwave, with a generous topping of whipped cream, makes the perfect Black Friday breakfast. Apple pie for breakfast is American simplicity, as long as the pie has been pre-baked.

Now Black Friday, THAT we have simplified, for years. We all slept late, sat around and read the newspaper (they still get the Washington Post here!), and tossed the tennis ball for the dog. How about that reality-show glamor couple that crashed President Obama’s first state dinner? Of course, Barack and Michelle Obama are America’s first family of glamor.

In a little while, we’ll have a larger family gathering at an undisclosed location in Montgomery County, with a pie theme. Pizza and left-over apple and pumpkin. Continue to relax and enjoy!

I’m enjoying Thanksgiving with family in Montgomery County, in the neighborhood where we grew up. Lilley, Poe, Bubbles, et. al.  They have an entire guest basement for me, with full bath.

This year we’re simplifying Thanksgiving.  Instead of a whole turkey with all the trimmings, the menu will include hot turkey-vegetable soup, cheese, wine, bread, pumpkin and apple pie, whipped cream. What more could we possibly need? I can hardly wait. Lots of talk. Scrabble. Maybe good movies on TV.

We have much to be thankful for, and we know it!  Thankful to the Creator, and thankful for each other. (And thanks to PicApp for making this selection of Thanksgiving photos available.)

Happy Thanksgiving to one and all! God Bless America! And God Bless The Whole Wide World, No exceptions!

Why have I wasted my life eating French fries at restaurants? Why have I limited my home cooking to nuking frozen food?

I should have known better. I read “Potatoes Not Prozac!  by Kathleen DesMaisons PhD.  I read the book 15 years ago!

I told my sister, Rosemary, about the book. She read “Potatoes Not Prozac.”  I ignored it, and she took its message to heart.

A few days ago, Rosemary told me how she boils Yukon Gold potatoes. She said it was OK to put butter on them! That was the magic word. “Butter.” Or maybe, “Boil.”

“Boil a potato, that doesn’t sound too difficult. I can do that!”

Tonight, motivated by the desire for a more frugal lifestyle, I boiled a potato. I knew to use water, but I wasn’t sure how long to boil the potato. I washed it first, left the skin on, and cut it in quarters like Rosemary said. I used the “stick a fork in it” method to decide when it was done.

I smashed the quartered potato a little and added a liberal amount of butter. I topped it off with a sprinkle of that brand-name “seasoned salt” (no MSG). The potato was great! Why didn’t I think of this before?

I don’t know if Kathleen DesMaisons Ph.D. would approve of the butter and the seasoned salt. She’s the one who wrote “Potatoes Not Prozac!” Ms. DesMaisons also has a nifty Web site, “Radiant Recovery,” where her disciples gather to meditate on the virtues of a life without sugar.

Wait a minute! No sugar? I don’t think I’m ready for that. Stick a fork in me, I’m done.

Now that I’m unemployed again, I’m planning to create a Recession Vegetable Soup. The predominant vegetables will be potatoes and onions, seasoned with salt and pepper. Long on vegetables but not much protein. Why do I have the sinking feeling that this adventure will turn out to be neither simple nor frugal?

Step One: Buy a pot large enough to make soup or stew. And I have an aversion to those non-stick coatings on most new pots and pans (what chemicals do they make that stuff with?)  Note that whenever I embark on a project, I always discover that I don’t have the necessary tools. This is why I gave up trying to fix my own car.

I’ve come to consider Walmart as my supplier of first resort, based on their claim that they “sell for less.”  However, I found what I needed at one of the big-box specialty stores — a shiny eight-quart stainless steel stockpot with a glass cover — for $20. Six quarts would have been adequate, but  the eight-quart size is what they had. So it goes.

The $20 price at the big-box store was less than anything comparable at Walmart, demonstrating once again that it pays to shop around. So I guess the purchase qualifies as frugal. It was also simple, since it didn’t need to be delivered or installed, and there’s no assembly required!

How many soups and stews am I going to have to make this winter to justify spending $20 to buy the pot?

Watch this space for the recipe and a progress report.

I'm nearly seventy and keeping life simple, somewhere on the Gulf Coast of Florida. Do not drive or operate power tools until you know how this blog affects you.